The deadline for comments on the G-Park planning application has now passed. A total of 114 objections to the proposal were submitted by residents. The decision on the application will be made by the planning team at Bedford Borough Council on 17th March. We will update this page with news when we have it.

Bedford Borough Council are still awaiting a formal view from the Highways Team so the decision cannot be made until that is complete.

The decision on the G-Park application has not yet been made however multiple residents have notified us of a significant increase in commercial traffic on the The Causeway and the impact it is having on them. They are concerned about how much this is likely to increase over the coming months and once new developments are opened.

Residents have mainly complained about the noise made by heavy vehicles 24 hours a day and a major increase in cars and motorbikes (especially during B&M shift changes) racing between roundabouts as they enter or exit Wixams, many with loud exhausts. As well as this being a nuisance, it’s also disrupting their sleep. There are also safety issues when crossing Fisherswood Road and multiple near accidents have been witnessed already, with so many young children crossing that road, and no dedicated crossing point or warning signs, there are grave concerns that someone will be hurt or killed. The increase in pollution has also been felt by some including one person who is suffering from serious asthma attacks already.

One resident has recorded and collated the current levels of traffic into the document linked below. It shows a current average of 56 HGVs crossing The Causeway per hour between 5am and 10pm with peaks of nearly 80 within 1 hour. Based on the planned increase in commercial floorspace it has been estimated the commercial traffic might increase by a factor of 2.4.

In January we suggested that an alternative route be found for commercial traffic and the Borough have now agree to look into this. However, it’s clear that there’s already a big enough issue which needs to be addressed and agreeing to the G-Park application without a Plan B in place might leave residents in an even worse situation if an alternate route cannot be found.

The planning application has been objected to by the Borough’s Environmental Health team and the developer has been asked to mitigate for the objections. Details of the objections can be found in the following documents:

A second consultation phase has now started with a deadline of 20th August for comments: 19/02724/MAR

We have reviewed the latest changes to the planning application and there are minimal changes associated with the scale of the buildings and the proximity to residential areas. If you haven’t done so already you can still leave a comment about this development which focuses on the material aspects of the buildings and site. In the outline application the buildings were further away from houses which means this can still be changed to move the units further away. This document outlines the changes between the documents and shows where the units have been moved closer.

The Borough have again rejected the G-Park planning application due to another objection from the environmental health team over the noise concerns and impacts on nearby residents. The planning team met with the applicant last week and they have indicated that they intend to revise the scheme to relocate the building to the south of the site and move the service yard to face Fisherswood Road.

They will spend the next few weeks working up the revised scheme, including a fresh noise assessment. Amended plans will then be submitted (potentially in the middle of October) and a further round of public consultation will then be undertaken.

The revised application documents have now been submitted and the developers have shifted unit 3 of the development to move the HGV depot onto the Fisherswood Road side. 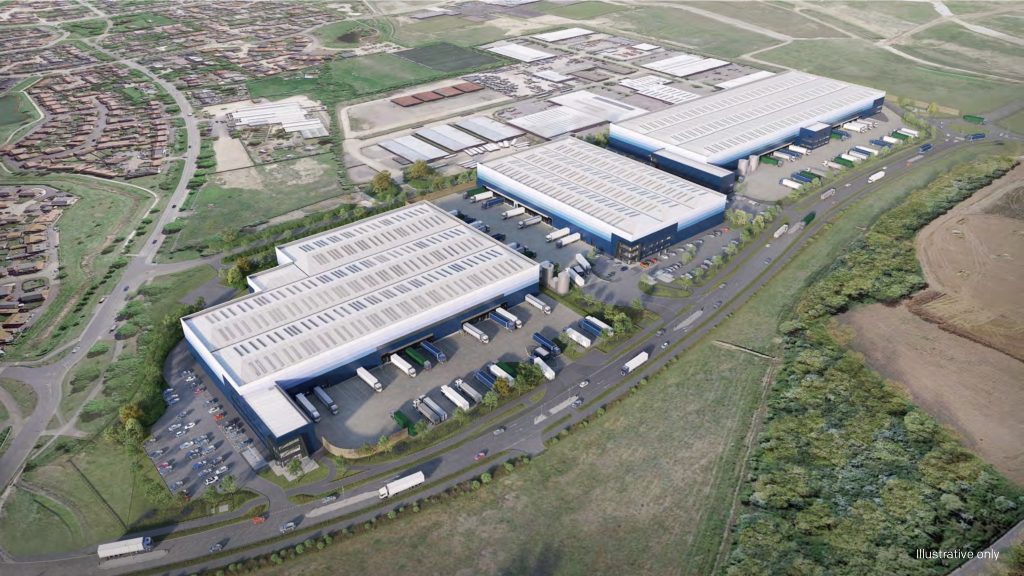 This has been done to address an objection from Environmental Health over noise impact concerns for residents. The developers have also added some 4 metre high fences to act as visual and acoustic barriers. With the depot now on the north side it now raises questions as to whether this will be more noisy for residents at the WRV.

Unit 3 itself will now also be closer to Watson Road and Bedford Road than in the previous consultation and in the already approved outline application, so will be visually more impactful.

The application for the G-Park development has now been approved:

Bedford Borough Council (BBC) planning committee have received an application for the building of 3 large warehouses on the land north of Watson Road, the road which currently serves Wilstead Industrial Park. As with all planning applications, the public has the right to voice their support or opposition to the proposals. We have created this information page so you can:

Planning Committees are legally obliged to consider views from the public in their decision making so we encourage residents to take the time to leave comments.

What is Being Built? 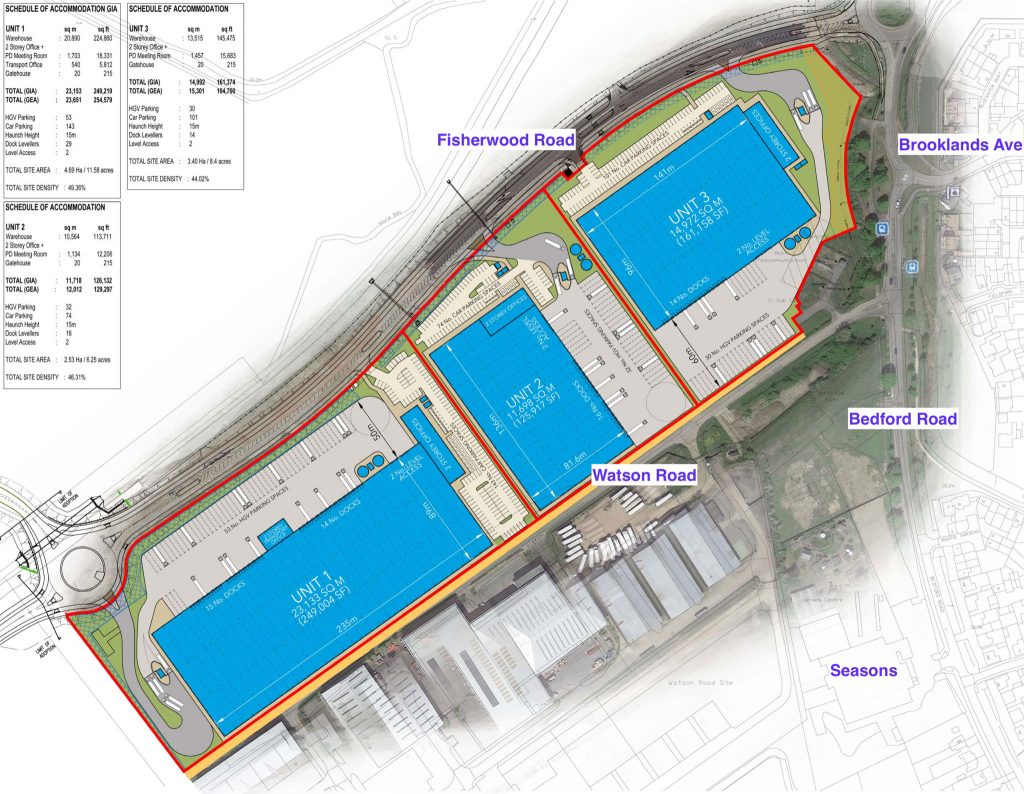 There are already a number of warehouses either built, being built or planned for Wixams: 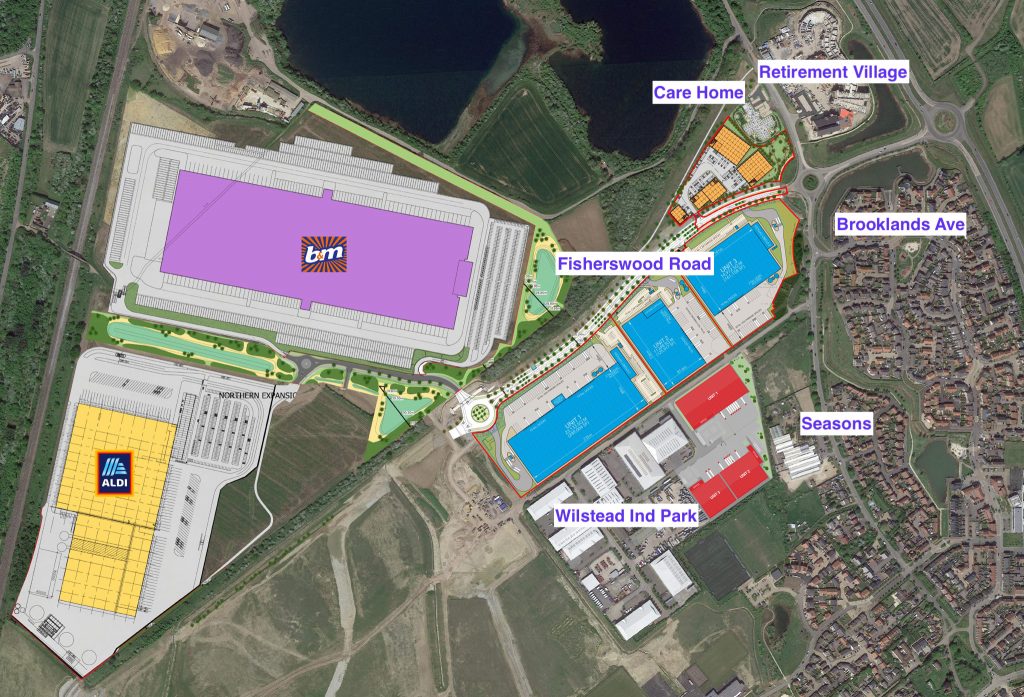 Whilst job opportunities for residents should always be welcomed, there are some potential concerns which could be raised regarding the building of these units. We have outlined a few issues below which the public might want to consider.

The three units are planned to be built on land which is currently open space and offers views across the Marston Vale. If built, these warehouses will be highly visible when entering Wixams via The Causeway, to residents as they move within the village along Brooklands Avenue and Bedford Road, and the biggest impact would be to those whose homes look directly onto the site. The closest unit will be within 90 metres of the closest home and will be over 18 metres tall.

The style of the proposed warehouses matches many huge warehouses around the country such as near Junction 13 of the M1 and is designed to reduce its impact from a distance. When compared to the brand new houses, the greenery on Bedford Road and the nearby lake, this type of building will dominate the landscape and significantly impact the visual appeal of this part of Wixams.

The offices of Unit 3 are alongside Bedford Road, this means any home visible from the building will be overlooked by workers in those offices.

All the units and warehouses listed above are accessed from the A6 via The Causeway. In the last few weeks there has been a significant amount of damage to this road and the main roundabout to Bedford Road possibly due to the increased HGV use since the opening of the B&M warehouse. There have also been comments made by the public regarding the noise made by HGVs accessing the industrial area at night. As more units are planned and built these issues are going to get worse.

If you are experiencing problems with lorries or HGVs you can report this to Bedford Borough Council using the following page: www.bedford.gov.uk/parking-roads-and-travel/roads-and-pavements/lorry-issue/

The areas around Brooklands Avenue, Fisherwood Road and Bedford Road towards Elstow are often busy with pedestrians, cyclists and dog walkers. The more vehicles using these roads the less safe these areas become.

With the existing and planned warehouses in Wixams being mainly for distribution it’s likely that we will see a huge number of HGVs travelling around the north of Wixams spewing a lot of pollution. The proximity of this site to residential areas including the Wixams Retirement Village means that pollution levels in that area will certainly be made worse, causing damage to the environment and posing a health risk to wildlife and residents.

With 24/7 operating hours there will also be an increase in the light projected externally from the warehouses toward neighbouring homes.

The Causeway is one of the main access points into Wixams and will be the route taken by many when visiting Wixams to view properties. Along with the existing warehouses such as B&M and in Wilstead Industrial Park, these three units might change the initial impressions of potential house buyers and may dissuade them from buying, negatively impacting property prices.

It’s unknown at this stage whether there are already businesses lined up to fill these three new units. However, the three units currently being completed adjacent to Seasons were built without planned tenants. There are other warehouses in the Borough which are built and remain empty, such as next to the A421 towards Junction 13 and the A428 near Kempston.

By planning in this manner the decision as to what types of businesses might invest in Wixams is being made by the landowners not by businesses themselves. There are already concerns that the Borough is being covered in warehouses as well as the areas close to Junction 13.

The typical jobs made available in warehouses are picking and packing along with administrative and other associated roles. Picking and packing jobs are normally low paid with current market rates at around £17,000 per year for full time employment. With the average house prices in Wixams being over £300,000 (source: www.zoopla.co.uk/house-prices/wixams/) it’s less likely that many of these jobs will be filled by residents. This would mean that employees will need to travel into Wixams from elsewhere and Wixams’ residents will be forced to seek employment outside, causing more congestion, noise, damage and pollution.

It was originally planned that Wixams would be built with a set of 16 Business Incubator Units which are designed to help startup companies. These units typically offer a set of facilities including office space, a phone line and broadband internet connection, meeting rooms and also experts to support new business owners. These facilities are often offered for free for a period but are typical cheap to rent after the free period finishes. The units planned for Wixams were to range in size from 25-100 m2.

To help with the meeting of a schools funding gap, the requirement to build the incubator units was removed, meaning startup businesses in Wixams are not able to take advantage of these facilities (source: Planning Application 15 03039 S106). There are no plans to offer a replacement for the incubator units which would help local businesses to get started and to help them build successful enterprises.

How to Take Action

This application is now closed.

If you would like to leave comments supporting or opposing the building of these new units you are encouraged to do so using the official channels provided by Bedford Borough Council. Please ensure you include the Planning Application Reference 19/02724/MAR.

We also recommend reading the following blog to help you if you’d like to object to this proposal: Martin Goodall’s Planning Law Blog

Send your email to planning@bedford.gov.uk

We held a community meeting on 22nd January which was very well attended. The residents were all given an opportunity to share their concerns and to ask questions. The main points identified from this meeting:

We would like to hear your views on this planning application and others. Please use the Contact page or join our Facebook group to get in touch with us.

We have taken great care to ensure the contents of this page are accurate, if you find a mistake please contact us so we can rectify it.